Home About Us» The Boundary
About Us

The vista can be seen on Virtual Globes 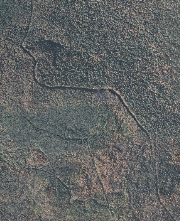 Anybody can appreciate the work done by the IBC by looking at the vista through Global Globes software (Aerial photo of the boundary in the Highlands).

If you look along the International Boundary between Canada and the United States in any forested area, it will appear simply as a 6 metre or 20 foot cleared swath stretching from horizon to horizon, dotted in a regular pattern with white markers. Over mountains, down cliffs, along waterways and through prairie grasses, the line snakes 8,891 kilometres or 5,525 miles across North America, tranquil, undefended but not uncared for. The boundary vista must be entirely free of obstruction and plainly marked for the proper enforcement of the laws of the two nations. The job of keeping the boundary vista in proper condition falls to the International Boundary Commission. The Commission was founded under the Treaty of 1908 for one specific purpose: the complete re-establishment and mapping of the boundary from the Atlantic Ocean to the Pacific Ocean. The boundary had already been defined by treaty and most of it surveyed by 1874. The fires of national honour, which had flared up over the legalities of boundary location and had coloured American and Canadian relations for 140 years, had been relegated to the history books. But between 1874 and 1908 the boundary had become overgrown and monuments obliterated so that it was necessary to re-establish the border demarcation to avoid any uncertainties that could lead to dispute. In 1925, when it was realized that such maintenance would have to be on a continuous basis, another treaty was signed establishing the Commission as the permanent caretaker of the boundary area and its markers.﻿

The proper definition and demarcation of the boundary is still as essential for sovereignty as it was throughout the history of boundary establishment. It prevents local misunderstandings that could lead to disputes.

To make the boundary visible and unmistakable, we clear and maintain a swath called a vista that extends 3 meters (10 feet) on either side of the line through dense forests, over mountain ranges, across wetlands and highlands and some of the most rugged terrain North America has to offer. We also control all works done within the vista.